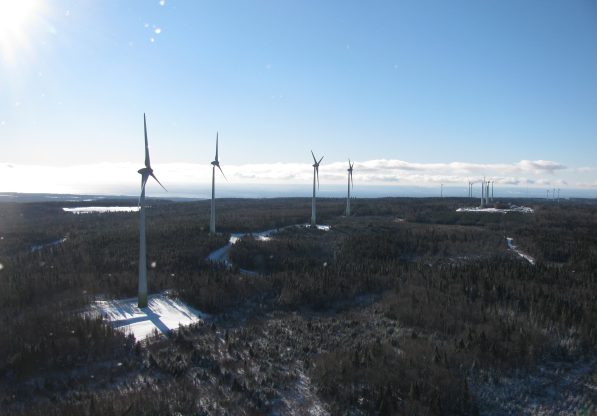 Located on the Gaspé Peninsula, TransAlta’s New Richmond wind farm has a capacity of 67.8 megawatts generated by 33 wind turbines and could annually supply enough electricity to power 11,000 Québec homes. The $205 million project, completed in 2013, provided over 200 jobs during the construction.

Power from the facility is sold under a long-term Power Purchase Agreement (PPA) with Hydro-Québec.

Twelve turbines are installed on public land and the other 21 are on private land. The Enercon E82 turbines were manufactured partly in Germany and partly in Québec. The turbine is formed from 18 concrete sections made in Matane and two steel sections made in New Richmond.

Nacelles (enclosures that house the generating components such as the generator and the dynamic chain) and the blades were shipped from Germany to the port of Matane. The turbines in New Richmond begin to rotate when the wind reaches nine km/h and when the wind speed exceeds 100 km/h, an automatic braking function engages to avoid damage. There are 18 turbines in New Richmond, 14 in St-Alphonse and one in Caplan.